Find a distributor near you

Skipping on EMV? Don’t Say We Didn’t Warn You…

If you’re not going to upgrade to EMV, you should at least know what you’re signing up for when the day comes that your store is hit with fraud after the 2021 deadline.

The news is full of skimming stories, but the real cost to the retailer comes in the form of chargebacks.

There are two types:

Lost and Stolen – Like you might expect, a card can be either lost or stolen. The fraud occurs when it’s used by someone to run up charges before the victim notices.

Counterfeit Fraud – This is where the liability shift is happening between the card networks and retailers. In this scenario, a criminal uses low-cost equipment to create brand new magstripe cards with stolen, but valid data.

The data is typically purchased on the dark web from other criminals who skimmed it from other unprotected gas pumps. In some cases, organized crime syndicates both skim the card data and create the fake (but very usable) cards.

What do criminals do with the fake cards they’ve made?

Criminals identify gas stations without EMV protection as targets. They then use the fraudulent cards to fill-up large vehicles with fuel.

These are not your normal oversized SUVs though. Instead, they modify the vehicle with specialized tanks that conform to the entire inside of the vehicle to store more fuel. That stolen fuel is then sold on what is known as the “grey market.”

You’re Hit with a Chargeback – What Happens Now?

The chargeback doesn’t occur until the original cardholder reports the fraudulent activity. If it’s caught by an algorithm and the card is put on hold, the site can be notified in a few weeks.

Before (and right now), the card networks would take care of reimbursement and any fees associated with the fraud, but that ends April 2021.

After the EMV deadline passes, not only does the unprotected retailer lose out on the cost of the stolen fuel, but they must also reimburse the end customer, and pay a chargeback fee on top of that.

The toll from one instance of fraud can look something like this: 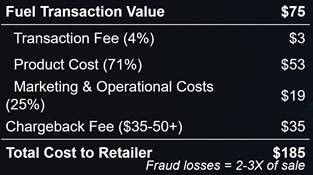 That’s just one instance of fraud. So how much of that can you expect as a retailer without outdoor EMV protection? These are the sobering numbers. 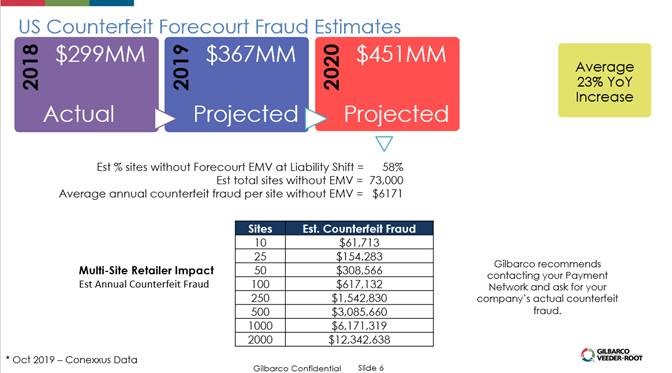 All of this can be avoided though, by upgrading fuel dispensers with outdoor EMV technology – and starting NOW.

The new outdoor EMV deadline will be April 17, 2021. If you haven’t begun your outdoor EMV upgrade, we strongly suggest contacting your local Gilbarco distributor as soon as possible.

You can find more information with our Quick EMV Migration Guide.